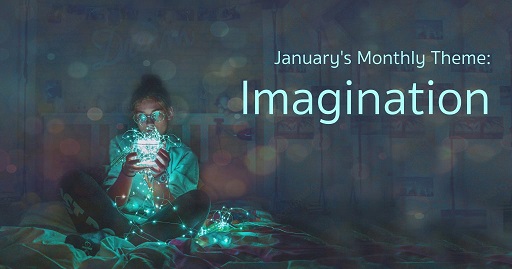 What Does It Mean To Be A People of Imagination?

Maybe our most important work is to re-imagine imagination.

Imagination’s great gift is improvement. At least that is what we’re usually taught. The deep magic lies in the way it can reshape our reality. We are urged to imagine the world we dream of. A world with more justice. More peace. More love. From that, a mysterious magnetism arises, a magnetism that pulls our imperfect present into an improved future. Imagination moves us forward. It makes us better.

Yet there’s a way in which this view of imagination impoverishes us. It steals the stage. Shuts out imagination’s other precious gifts.

For instance, think of what happened when you got out of bed this morning. After a shower and a cup of coffee, you didn’t just pull on fresh clothes, you also pulled out a jewelry box and slipped on your grandmother’s ring. As you slid it on your finger, she slid, not just into your memory, but into your day. Now, because of imagination, you aren’t just elegant; you’re accompanied. Or how about that invisible friend of yours when you were a child? Imagination made sure you didn’t travel through those early years alone. It conjured up a loyal friend. Even today, amidst the hustle and bustle of adult life, tell me you don’t hear the guidance of ancestors and friends all day long. It’s all one giant reminder that imagination doesn’t just improve our lives, it populates it.

And illuminates it too. That’s right. Imagination isn’t just a force that drives us forward toward a more perfect future, it also pulls the sacred into our impoverished present. Imagination is what transforms trees from potential firewood into wise friends. Imagination is what moves us from lording over the natural word to seeing ourselves as part of it. It gives the world a soul. And not just the natural world, but the ordinary world too. Through the lens of imagination, we perceive the common as precious, even miraculous. The laughter of our children becomes the sound of angels. Sunshine on our face becomes a greater treasure than gold. Our “everyday” lives are understood as amazing adventures and inexplicably lucky gifts.

So friends, this month, do everything you can to soak in the many messages of imagination. It’s not just shouting, “Improve the world!” It’s also pleading, “Let the world come alive!”