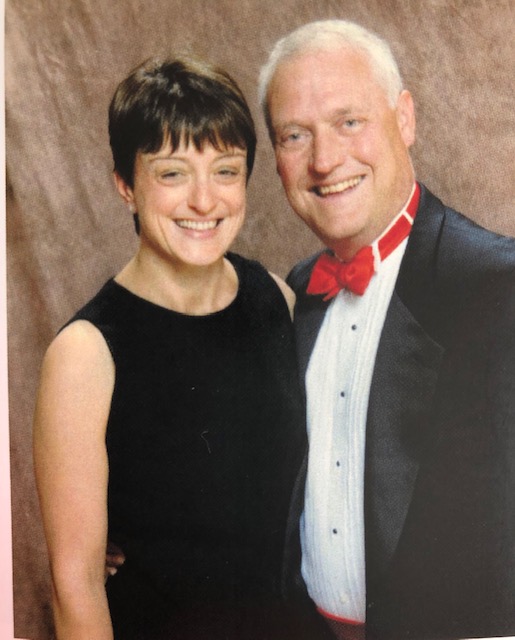 Brent A. Wilkes
A Visionary with Hope and Humor

…to live in this world

you must be able
to do three things
to love what is mortal;
to hold it

against your bones knowing
your own life depends on it;
-and, when the time comes, to let it go…

Brent A. Wilkes, with his wife Linda, crossed our UUCSS threshold in 2006, and then Brent graced us with his vision for a more vibrant congregation, with his strong leadership, and with his irrepressible sense of humor.  They continued to live in Saratoga Springs until June, 2017, when they moved back to the Boston area to be closer to family.  Sadly, Brent died on September 10, 2020.  He will be fondly remembered by so many.

Brent was definitely a force to be reckoned with!  Using his lifelong leadership skills and his commitment to being a UU, he immediately began to assess who we were, what we were capable of, and how we might grow into a stronger congregation, one with a significant connection to both the surrounding UU congregations and the community of Saratoga Springs.  First he joined the Finance Committee in 2006 and then served for 3 years as President of the Board of Trustees, 2008-11.  He chaired the Leadership Committee from 2011-13, and served on the Stewardship Committee from 2007-13 – chairing it for 2 years. In 2011, he joined the Membership Committee; in 2016 he became a Hospitality team leader. As is evident, his involvement ran deep.  His dedication inspired us.

Consistently throughout that engagement, he began planting the seeds of growth and development.  Brent even hired an architect to render a possible expansion of 624 Broadway, a testimony to his commitment to UUCSS.  At the time, many were uncertain how to respond but, in truth, that incident was a much needed jumpstart that led to our most recent explorations.

Brent’s support of UUCSS was displayed in other ways, as well.  He served on the CRUUNY Board, worked with the UUA, and attended two Saint Lawrence District Annual Meetings.  He led 4 lay services at UUCSS; a recording is linked below from a 2014 service titled “The Spirituality of Our Story” in which Brent focuses on the experience of writing his memoir. In 2009 Rev Linda Hoddy asked Brent to write a piece on Hope as a contribution to her service; in it he explores Hope and his relationship with her. That, too, is linked below.  Both writings reveal his thoughtful nature, his continuous self-reflection, and some of his wonderful sense of humor.  If you were ever in a crowd of people and wanted to know where Brent was, you could just look for the bow tie and listen for the robust and engaging laughter.

Brent’s influential reach was wide.  He was on the Caffè Lena Board, serving as President for a part of those years.  He generated the effort to renovate Lena’s space, to build relationships with other venues, and to increase membership.  He belonged to the Democratic Committee for Saratoga Springs and even ran for Mayor in 2011.  Also, early on he advocated for Charter Change in Saratoga Springs and lent his professional skills to that complex process.  Brent strongly supported Albany Pro Musica, again through a Board Presidency during which he oversaw the hiring of the organization’s new director.

Our sense of personal loss is enormous, but his deep legacy will be with us and UUCSS from this day forward.

If you wish to make a gift in Brent’s honor to a charity, here are a few that he and Linda both love:  UUCSS, UUSC, Caffè Lena, Albany Pro Musica, WMHT, and WAMC.  There will probably be a service in October.  Go to www.barilefuneral.com or Facebook, Barile Funeral Home, for future information.  In the meantime, Linda says, ‘Please no flowers!” but feel free to send cards, notes, emails to the address listed in this week’s Journey Well.

Finally, it would be remiss not to mention Brent’s love of boats and the water.  His true sense of self and his joy expanded when he was at the helm. Actually, “at the helm” is his life story.

Please click on the links below to read Brent’s sermon on “Hope” from 2009, and to hear the audio of his sermon in 2014 on “The Spirituality of Our Story.”

A Song for the New Year