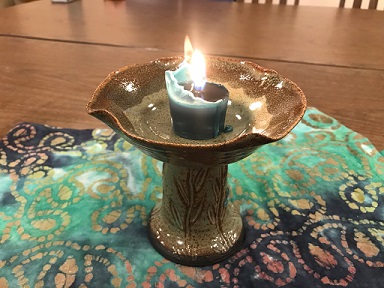 by Pam Collins, Board President

As you might expect, the Board’s primary concern at this time is the Pledge Campaign.  While it could be considered good news that somewhat less than half of the congregation have submitted pledges, which has brought us to about half of our goal, I suppose the bad news is that we’re only halfway there, both in numbers of folks who have pledged and in achieving our monetary goal based on a flat budget (i.e. pretty bare bones).  So, whether one sees the glass as half full or half empty, the fact remains that we still need to fill the glass if we’re to have enough “juice” to carry us through the coming year.

We’ve had wonderful services throughout the pandemic, thanks to a tech-savvy and indominable minister and a devoted bunch of folks who work together to make the services happen, but I know full well what even though we enthusiastically share “Zoom greetings” on Sunday mornings, it’s just not the same as being together and all that means.  Dave and I have nearly an hour’s drive to get to Saratoga and believe me, there were some Sundays that sleeping in was seriously tempting.  But there was never a time that I was less than delighted that I’d made it out of bed, on the road, and into the space shared by so many wonderful folks. There aren’t sufficient words for the level of comfort and inspiration I get from being a member of UUCSS.

And in the bigger picture, I would venture to guess that there aren’t many, if any, in our congregation who aren’t concerned about the critical times we are facing.  America may well be at a crisis point.  It’s easy to despair…but of course, we can’t, can we?  As long as we have breath, we need to speak and act from the principles of our faith.  More than ever, we need to keep Unitarian Universalism alive — a faith in love and human goodness, rooted in reason, science, and good works.  To do so, we need to come together to keep the lights on, the staff paid, and the mortgage current.  The cup is half full, but we need it full to the brim.

In other Board news….The project to partner with Albany UU for RE support is coming together nicely.  The formal agreement should be completed soon and be presented to the Board for approval.

Social Justice is modifying its approach, moving away from the committee structure and into a coordination of various social justice initiatives as proposed by members of the congregation.

For the month of October, the Board will concern itself with reviewing and approving the Budget and preparing for an annual meeting accomplished virtually.  Many churches have already achieved such an endeavor, so we have models to follow, but the Board wants to be sure that this annual event meets our requirements and is as inclusive as we can make it.

Stay well, stay tuned in, and remember to pledge!!