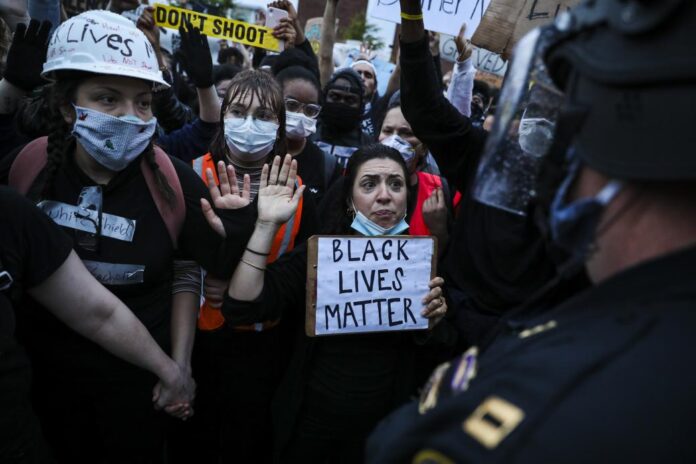 Responding to Support Black Lives
The feelings of shock and anger in response to the murder of George Floyd in Minneapolis have been strong, not just because of the flagrant violence and disregard of George Floyd’s humanity, but because it is one case in a whole history of black lives ended at the hands of the police.

There are many ways we need to respond to this crucial moment, and it can feel overwhelming.  The temptation can be to simply turn away.  We cannot.  We have to acknowledge and respond to the pain of this moment.  But in doing so, it is important to remember to pace ourselves and remember that no one of us alone can possibly do “all the things.”  We each need to find our place in the efforts to support black liberation and black organizing.  We need to be open and listen to black leaders and organizers, even when their message is troubling and difficult. We need to lean into discomfort.  And we need to maintain our own spiritual and physical health and wholeness, because (as in my sermon on Sunday, June 7) good things happen slowly.  The work needed is continuing.

A Call for a Civilian Review Board in Saratoga Springs
One concrete action that we can take locally has to do with some unfinished business.  The Social Justice team has recommended to the Board that we advocate individually and as a congregation for the creation of a Civilian Review Board to investigates complaints against the Saratoga Springs City Police Department.

Two years ago, in response to revelations that a proper procedure for review of police actions in the death of Darryl Mount, Jr. was not followed, one demand made was that the city institute a Civilian Review Board.  Congregant Eric Lawson collaborated with the Saratoga Immigration Coalition, of which our congregation is a member, to create a draft of what a Civilian Review Board might look like and how it would operate, and delivered this proposal to the Commissioner of Public Safety and the Mayor.  Rev. Joe joined in with other faith leaders, the Saratoga Immigration Coalition, MLK Saratoga, and members of the community in a demonstration that included the demand for a Civilian Review Board.  The city instead decided to create a Citizen’s Advisory Board, which seems more oriented to public relations, and does not have any authority to independently investigate grievances against the police department.

Our city and our police department could set an example by instituting a Civilian Review Board.  The Social Justice team, Rev. Joe, and our Board of Trustees encourages individual members of the congregation to communicate your support of a Civilian Review Board to the Commissioner of Public Safety Robin Dalton, Mayor Meg Kelly, and other members of the City Council.  Contact information for City Council Members can be found here: https://www.saratoga-springs.org/963/City-Council-Members and the mailing address for the City of Saratoga Springs is still 474 Broadway despite the continuing renovations.

Understanding Why There Is a Movement to “Defund the Police”
One thing that we can do in this moment is to take some time to better understand what at first hearing for many of us is one of the most shocking demands being made by black leaders and organizers right now: Defund the Police.

One thing to understand is that this call is more completely understood as a call to demilitarize the police and to disinvest in policing in favor of investing in black lives.  The way the Movement for Black Lives puts it is this:  “We demand a divestment from the police and investment in black communities.  We demand local schools, colleges, universities and all public institutions cut ties with the police.” (https://m4bl.org/week-of-action/)

It may be difficult to understand this call.  As a white person, I was always told I could trust the police.  I should go to them when I need help.  When I told this to a black man who was a lawyer for the Air Force, he just laughed.  He said, when the police come, my mom told me to get out of there!

Our UUA President Susan Frederick-Gray has done an excellent job explaining and unpacking this call in a recent column that she wrote for the UU World called “A message to white Unitarian Universalists.”  You can find it here: https://www.uuworld.org/articles/president-special-message-policing  Another piece of recommended reading is a recent press release from the UUA: “Stop Calling the Police and Start Eradicating Anti-Blackness” (https://www.uua.org/pressroom/press-releases/stop-calling-police-start-eradicating-anti-blackness)