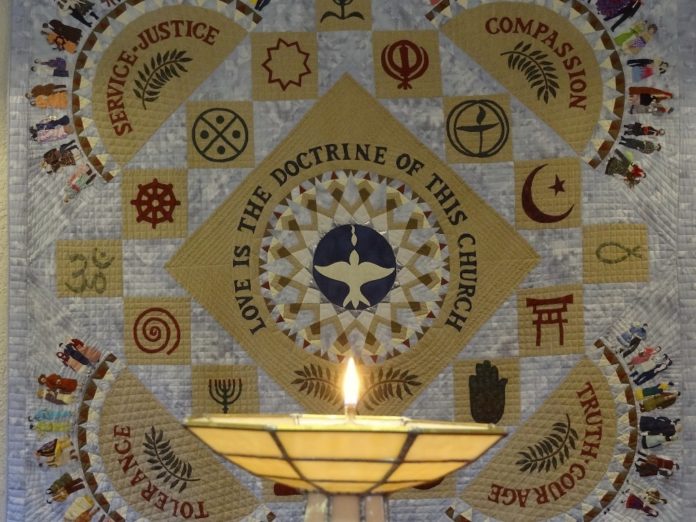 So as I sit in my recliner, exercising social distance and deeply missing our Sunday worship together, perhaps the slowing down has allowed me to see some things more clearly.

Love, truth, service, peace and freedom — these are the values we give voice to every Sunday and carry in our hearts throughout the week.  This is the promise, the covenant, we make with one another — to live these values in our interactions not only with our immediate community but also with the greater world.  They are aspirational to be sure and perhaps there are times when we say them by rote and don’t think about them deeply. But I submit to you that they really matter and have a deep affect on our lives and how we behave.

As Unitarian Universalists, I think perhaps the most telling difference between us and traditional religions is that we don’t join together to profess in unison what we believe but rather how we will behave.  For UU’s, belief is a personal matter, but behavior is a public, societal concern.  To be fair, right action is a concern of all religions, but the difference is, that it is hooked to (assumed to be) the result of belief.  If you believe in God, Jesus (as the Son of God), Mohammad,  then you will behave well in the world.  The problem with this if/then construction, as I see it, is that it implies that if you don’t believe, then what’s at work to get you to behave beneficently toward others?  (I’ve heard that some Evangelicals have deep and agitated discussions about whether or not one could be a good person if they’re not “Christian” — but I’ll let that slide).

I was raised Presbyterian.  My mother was the church-goer, my dad, not so much.  He found his God in a walk in the woods. But he urged us kids to go to church because “it would make us better people.”  So when, in the mid 60’s I experienced a racist act (or inaction) by “my” church, everything crumbled. I gave up on the religion, the idea of “church,” and most of all the notion of the espousal of “belief” as a path to right action.  Of course, my experience was a micro-version of a long history of the failure of the “if belief then right action” equation of religions.

So how does our covenantal approach work differently?

In my isolation these past days, I have been thinking about how my behavior has changed since becoming a UU and moreover, how my “church” self is a different animal that my (former) “work” self.  My aspirational ethics were the same, but my living into them more challenged in the workplace. I was a decent teacher I think, and opened my heart to my students in a way appropriate to the teachings of Parker Palmer (my hero in that arena), but as a faculty member, and especially as department chair, it was all too easy to fall into silo mentality, give in to negativity and feed myself on gossip.  As Department Chair, try as I might to create an atmosphere of trust and enthusiasm within and between departments, the rock and the mountain were my constant companions.

Then there’s UUCSS.  The difference is stunning, especially as I’ve taken on a leadership role (which I feel much less suited to, even, than department chair).  Here, within the truly Beloved Community, the support is like the warmth of a wood stove. The enthusiasm meets and surpasses mine. The determination to stay positive is a studied behavior, of which I’m an avid student.  What energy I put into it is returned with interest (at a much higher rate than I can get anywhere else). When I reluctantly took on the presidency, I did so telling myself (and a few others) that I would approach it as a spiritual practice, not knowing exactly what I meant by that, but it sounded good.  Little did I know.

So what is the difference between “church” and “work?”

The key one I think is covenant.

We make a promise to one another to be our best selves.  We articulate it. We remind ourselves and each other of it.  We say it face to face. There is nothing like it in the workplace.  In some enlightened environments, there may be ethics guidelines people are asked to sign on to, but they have more to do with the law and the basics of the profession, not about how we will behave on a day to day basis with each other.  In the workplace, we focus on doing our jobs at the expense of bringing to consciousness how we interact with one another, and in the larger world (a world where social distance is not in effect), we weave in and out of strangers hardly seeing them.

For the foreseeable future, we will not be joining together to speak in unison our sacred promise to one another and that is perhaps one of the things we will miss most.  But “we will carry it in our hearts until we are together again” because the covenant of right action in the world is, I believe, the best thing about UUism. But social distance need not be heart distance.  Our covenant is a living truth.

Love is the doctrine of this faith,
The quest for truth is its sacrament,
And service is its prayer.
To dwell together in peace,
To seek knowledge in freedom,
To serve human need,
To the end that all souls shall grow into harmony with the Divine—
Thus do we covenant with one another and love beyond belief.